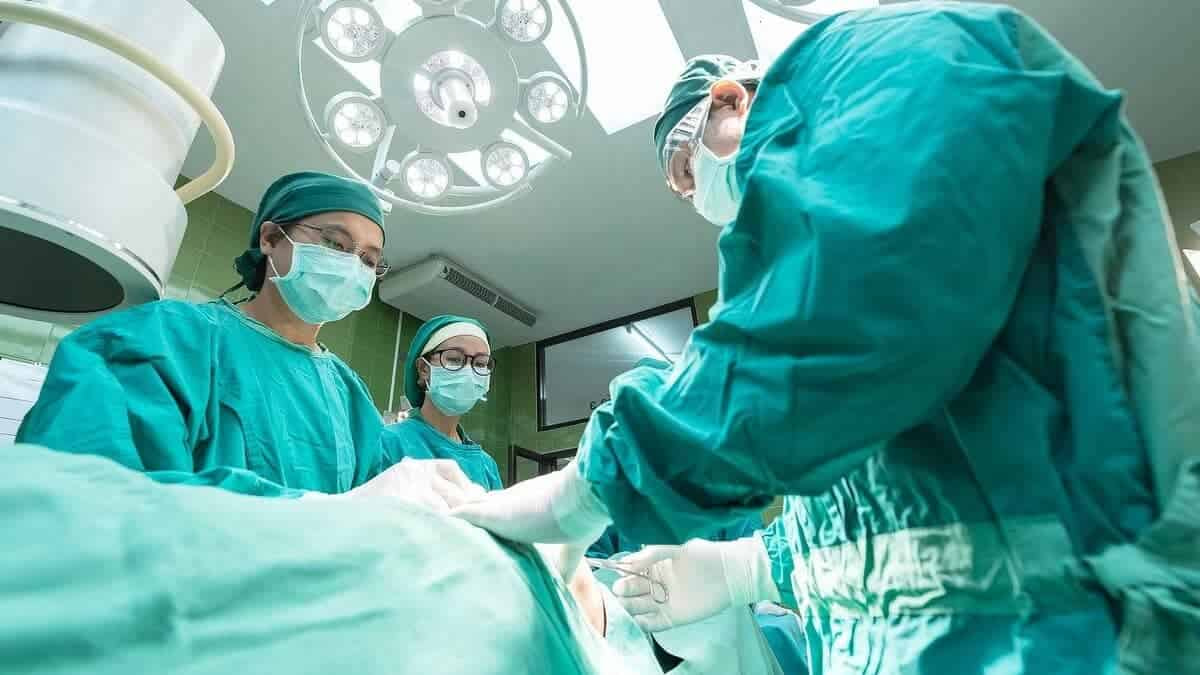 In general, enucleation is an eye removal surgically. The eye-cancer specialists, use this procedure to remove the tissue lump (ocular tumors).

This article focuses on enucleation, when it is done, its procedure, side effects, and post-surgery care.

After enucleation, the patients lose their vision permanently. Hence, the doctors use these types of ocular surgeries as last resort. The patients, however, learn to perform their daily activities normally, with the help of the other eye over time.

The surgeons replace the natural blind eye with artificial eyes (ocular prosthesis), during the surgery, in order to preserve the facial appearance.

When Enucleation is Done?

In fact, doctors suggest enucleation as a last resort, when all other options fail. The common conditions that require this surgery include the following:

Due to inflammation or increased pressure, the blind eyes, in some cases, may become painful. Sometimes, using mere eye drops can reduce the pain. Otherwise, your eye doctor may suggest injecting alcohol behind the eye.

He may also repeat the injection if needed. However, injecting alcohol may have some side effects like eyelid drooping, swelling, poor eye motion, etc.

If all the above treatments fail, you may have to go for enucleation. This provides dramatic pain relief, in most cases.

In some cases, blind eyes may provide an unsightly appearance. The eye specialists, in such cases, suggest using the scleral shell.

Typically, an ocularist, makes the scleral shell specific to patients. He, in most cases, use hard acrylic substances to make the scleral shell. Then, he paints them to resemble natural eyes.

The scleral shell must be worn in front of natural blind eyes. They are also called prosthetic or artificial eyes.

Eyes may suffer severe infections due to various reasons. In such cases, doctors may have to remove the eyes surgically. Otherwise, the infection may spread to the tissue surrounding the eyes. These infections may further spread to other healthy parts of the body also.

Sometimes, eyes have cancerous growth in them. In such conditions, enucleation becomes necessary. Otherwise, the disease may spread to other healthy parts of the body quickly.

What Are the Types of Eye Removal Surgeries?

The most common surgeries to remove the human eye are as follows:

In this procedure, eye surgeons remove the inner parts of the eye. But they leave sclera, eyeball’s white outer layer, in place. Hence, the extraocular muscles are not disturbed.

After the surgery, doctors place the implant inside the sclera. Therefore, the appearance remains largely unchanged, though the eyes cannot function.

Normally, doctors suggest this procedure to treat severe pain, infections, and other problems inside the eyes, that already lost their vision. Although this surgery can be performed with just a regional nerve block, most surgeons use anesthesia to keep the patients immobile.

In this procedure, the surgeons remove the entire eyeball, including the sclera, detaching extraocular muscles from it. However, they do not disturb the other orbital contents largely.

Doctors typically suggest this procedure to treat malignant cancers or infections occurring inside the eye globe. These types of conditions may lead to vision loss, after which the doctors consider the surgery. Examples include retinoblastoma and other forms of cancer.

Doctors also suggest enucleation to treat eye traumas and some types of eye injuries, that are not recoverable.

The surgeons usually carry out this procedure, keeping the patients under general anesthesia. Since they remove the eyeball completely, the patients may feel less postoperative pain. Other after-effects such as swelling, inflammation, etc are also comparatively less.

After this procedure, doctors usually fix an artificial eye, to maintain the appearance.

This procedure includes the removal of the entire eye system. That is to say, surgeons remove the eye socket as a whole, including muscles, optic nerve with varying bone parts of the orbit, and the lacrimal gland system. Depending on the proliferation of the tumor, surgeons may or may not remove the eyelids.

Doctors carry out exenteration to treat large cancers in eyes, eyelids, or cancers from other parts, extending into eye sockets. Some severe fungal infections may also require this procedure.

Often, exenteration is carried out with associated procedures such as craniofacial resection or maxillectomy to treat cancers. The surgeons use general anesthesia to proceed with these types of surgeries.

After exenteration, the doctors usually reconstruct the free flap or regional flap to cover the defects.

In most cases, the surgeons make use of general anesthesia for these procedures. Therefore, the patients will not see or feel anything during the course of the surgery.

Some surgeons also inject additional local orbital anesthesia, before fixing the pressure bandages and completing the surgery. Hence, the patients may feel minimized pain when they wake up in the recovery room. After that, they can leave the hospital in a few hours.

Consequently, the patients may have headaches for a couple of days. Doctors normally provide medication for headaches or any other possible discomforts, after the surgery.

During the bandage removal process, most eye doctors fix a temporary prosthesis. After about 6 weeks, they replace it ocular prosthesis, a more permanent form of prosthesis

Compared to the removal of kidneys or lungs, removal of the eye hurts less. Most patients get used to their monocular vision with time.

What Are the Side Effects Associated with Enucleation?

There are some side effects associated with enucleation as described below:

1.) After the surgery, the patients lose their vision permanently. Hence, they have to be used to Monocular vision.

2.) The integrated implant, most likely, tend to extrude. They may also cause infection or bleeding (hemorrhage) with time. However, modern technology has helped to minimize these complications to a great extent, these days.

3.) The additional procedures such as craniofacial resection, maxillectomy, etc. can lead to further complications. These complications include Blood clots, epiphora, and CSF leaks

How to Care After Enucleation?

After enucleation, doctors cover the operated eye with a high-pressure bandage for about a week or so. During this time, you may have bruising, swelling, and other forms of discomfort. However, these are normal after-effects, that may heal in a couple of days.

Keep the bandage clean and dry. Do not press harder, bump or rub the eye socket. In the meantime, take medications prescribed by your doctor on time. They help to heal the wounds faster and safer.

After the prescribed time period (a week, usually), make sure to revisit your doctor. In most cases, the doctors remove the bandage and fix a plastic eye (temporary prosthesis) during this visit. They may also change the medication if needed.

At this stage, some patients may have tears (mixed with blood) coming out of the eye socket. This is completely normal, especially after fixing plastic eyes.

Just wash the outer portion of the eyelid with a clean, warm, soapy washcloth. Never allow the matters to accumulate and form a crust on the portion surrounding eyelids.

Do not run the shower, for at least a couple of weeks on the operated eye. Follow standard instructions for about a month including the following:

2.) No lifting of heavy goods

3.) No pulling, pushing, or other kinds of strenuous physical activities.

Your eye specialist may also provide you with specific instructions pertaining to your conditions. In general, the healing process continues for about 6 – 8 weeks, after which the doctors fix the ocular prosthesis.

In most cases, the patients can perform non – strenuous activities within days after the surgery. However, they may take about 6 – 8 weeks to return to work or school, as the orbit heals.

In the meantime, they must follow the standard or specific instructions given by the eye specialists. This helps the wounds to heal faster. They should also avoid blood thinners and other medications unless prescribed by the doctors.

There are rare chances that tumors regrow in the operated areas, especially behind the prosthesis. Hence, visit the eye specialists regularly at scheduled intervals.

1.) When enucleation is done?

Generally, eye specialists suggest enucleation as a last resort, when all other options are compromised. This happens typically when severe injuries or certain diseases inflict an eye.
Some of the diseases that can require enucleation include ocular tumors (uveal melanoma, retinoblastoma, etc.,) and end-stage glaucoma.

2.) How enucleation is done?

The surgeons use general anesthesia so that the patients won’t feel any pain during the procedure. They remove the eyeball completely, including the sclera. However, they leave the eye muscles out intact.
Then, they place an artificial eye inside the eye slot. After about a couple of months, they replace the artificial eye with an ocular prosthesis.

3.) What is the definite process of enucleation?

During enucleation, the surgeons dethatch the extraocular muscles from the sclera. Then, they attach them to the implant, if feasible. Finally, they close the implant over with the tissues (conjunctiva and the tenon’s capsule) that surround the eye.

Drifts
What to know about Medicaid
What To Know About Medicare

What is Neurobion Forte?

What To Know About Medicare?

Mesothelioma Commercial Ads – What to know?

What to Know About Mesothelioma Biopsy?

Biphasic Mesothelioma – What to Know?

We use cookies on our website to give you the most relevant experience by remembering your preferences and repeat visits. By clicking “Accept”, you consent to the use of ALL the cookies.
Do not sell my personal information.
Cookie SettingsAccept
Manage consent

This website uses cookies to improve your experience while you navigate through the website. Out of these, the cookies that are categorized as necessary are stored on your browser as they are essential for the working of basic functionalities of the website. We also use third-party cookies that help us analyze and understand how you use this website. These cookies will be stored in your browser only with your consent. You also have the option to opt-out of these cookies. But opting out of some of these cookies may affect your browsing experience.
Necessary Always Enabled
Necessary cookies are absolutely essential for the website to function properly. These cookies ensure basic functionalities and security features of the website, anonymously.
Functional
Functional cookies help to perform certain functionalities like sharing the content of the website on social media platforms, collect feedbacks, and other third-party features.
Performance
Performance cookies are used to understand and analyze the key performance indexes of the website which helps in delivering a better user experience for the visitors.
Analytics
Analytical cookies are used to understand how visitors interact with the website. These cookies help provide information on metrics the number of visitors, bounce rate, traffic source, etc.
Advertisement
Advertisement cookies are used to provide visitors with relevant ads and marketing campaigns. These cookies track visitors across websites and collect information to provide customized ads.
Others
Other uncategorized cookies are those that are being analyzed and have not been classified into a category as yet.
SAVE & ACCEPT